Pumpkin is definately not just for pies. Why not serve up some yummy pumpkin cupcakes. They make a yummy addition to your Fall, Thanksgiving or Halloween treat table. This is a super easy recipe and the best part...the cupcakes are not super sweet. If you love sweet, top them with your favorite icing. We topped ours with a classic buttercream icing, but these taste yummy with cream cheese frosting or maple buttercream frosting as well. The recipe makes a standard size cupcake but we chose to make ours in mini and for the kiddie factor finished them with some sweet candy corn sugar gummies. They did NOT last long at our house. :) 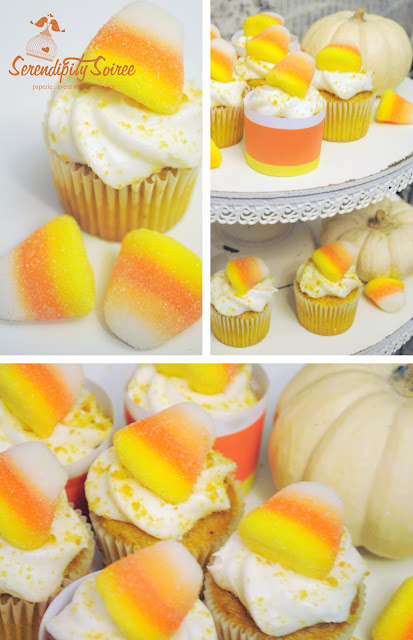 
Have ready a greased 1-cup heatproof glass measure near the Stove.

In a medium bowl, beat the yolks with an electric mixer until light in color. Meanwhile, combine the sugar and corn syrup in a small saucepan (preferably with a nonstick lining) and heat, stirring constantly, until the sugar dissolves and the syrup comes to a rolling boil. (The entire surface will be covered with large bubbles.) immediately transfer to the greased glass measure to stop the cooking.

If using an electric hand-held mixer, beat the syrup into the yolks in a steady stream. Pour a small amount of the syrup over the eggs in the mixer, and beat until incorporated. Continue until all the syrup is used up, and the mixture is pale and sticky, like liquid taffy. Continue beating until the mixture is completely cool.

Gradually beat in the butter and, if desired, any optional flavoring.. The buttercream will not thicken until almost all of the he butter has been added. Place in an airtight bowl. Bring to room tempeature before using. Rebeat to restore texture but not until it has reached room temperature to avoid curdling.
Tips and tricks
Don't allow the syrup to fall directly onto the beaters as it will spin the syrup around the sides of the bowl. The syrup must come to a rolling boil or the buttercream will be too thin. The egg/syrup mixture must be completely cool before adding the butter. Using a hand-held beater makes this easier.
icing adapted from the cake bible
Posted by Serendipity Soiree at 6:49 AM

[se-ren-dip-i-tee] "The faculty of making fortunate discoveries by accident."

We were featured on Amy Atlas!